Menzerna 3000 is a tried and tested finishing polish, which is part of the standard polishing range from Menzerna. It’s intended to be used as the final step in a multi-stage polishing process. A finishing polish contains fine polishing abrasives. These can refine the work done by heavier cut compounds which can often leave the surface with a hazed appearance.

Menzerna 3000 has a cut rating of 3/10 and a gloss rating of 9/10 and should be used with a finishing pad. This cut rating is not enough to remove the majority of defects from paint but may serve to remove wash inflicted swirl marks, oxidisation and the aforementioned hazing. Menzerna 3000 contains no waxes, silicone, or fillers. 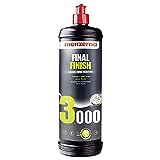 I tested this polish using a Vertool Forced Drive polisher with a Menzerna finishing foam pad. Before polishing always ensure the paint is clean and decontaminated, which involves removing tar and iron using dedicated chemicals and the use of a clay bar to remove embedded contaminants.

I first primed the pad with the product by spreading the product to cover all dry spots. Dry spots can cause the pad to stall on the paint, which can lead to hazing and poor results. With the pad primed I added 6 small drops of polish, roughly the size of a pea as shown below.

The quality of finish left by 3000 is impressive. On the black paint I was testing, the metallic flakes really popped out under the inspection light. The swirl marks that were present on the panel had been removed successfully. I also tested this on a section that I had previously polished using Menzerna 1000. Due to the low refinement ability of that polish, the surface was hazy and quite dull. A polishing set of 3000 was enough to completely change the appearance of the panel, from what looked like grey to black.

This polish can be used to refine polishing work previously done by heavy cut compounds. This is their primary intended purpose, but they do also have a use of their own accord. This polish has shown it can remove light swirl marks that are present on the vast majority of cars. It could serve as an annual polish for the enthusiast detailer.


Any washing at all increases the chance of swirl marks being inflicted, even if safe wash procedures are followed. Using a heavy cut compound regularly will eventually burn through the clear coat and a costly respray will be required. This polish would work well as an annual reset for the paint, as it removes very little clear coat.

After four passed much of the polish had diminished and so wiping the residue was no challenge with a plush microfibre. This process is also helped by using a panel wipe.

This is intended to be the final step in a detail before applying protection. While the other two finishing polishes do have slightly higher gloss ratings, the difference is slight and owning one of the finishing polishes makes the others obsolete in my view. Wiping down with a panel wipe and applying an LSP is the best option following this polish.

Menzerna 3000 is sold in 250 ml and 1000 ml bottles. Prices vary but are usually around £12 and £30 respectively. Bear in mind the 250 ml bottles can usually be bought as part of a set which may represent greater value.

I weighed how much polish I would need to correct a section roughly 40 cm x 40 cm. This came to 7 grams. It is hard to predict how much polish will be needed for a car, as every scenario is different, but assuming there are 25 ‘sections’ on a medium car, around 175 grams of polish would be needed. This polish has a density similar to that of water, so this also equates to 175 ml of polish.
Based on the cost of a small bottle, this would cost around £8.40 or £5.25 for a larger bottle.

This product is not designed to remove large amounts of clearcoat at a time. To confirm this, I took depth measurements before and after polishing to see what if any difference there was.

The results confirmed my expectations, as the average before polishing was 117 μm, while the average after testing was 116 μm (1 μ is equal to 1/1000th of a millimetre). On extremely soft paints slightly more may be removed but in general, this is a product with minimal cutting power.

Not only can this product be used to remove polishing marks left by heavier compounds, but it can also remove swirl marks outright while leaving an excellent finish with good clarity and depth. The first photo below shows a 50/50 with the upper half having been polishing using HCC1000 alone, while the bottom half had been further refined using 3000.


The below photos demonstrate the ability of this polish to remove light swirl marks that may arise as a result of daily driving and washing.

Menzerna 3000 is capable of removing very light swirl marks such as may be found on a well-cared-for vehicle. If a car has deeper swirls, as would be inflicted by an automatic car wash, this polish would not be enough to completely remove all the defects.

No, Menzerna 3000 is free from waxes, fillers and silicon.

What is the difference between the Menzerna finishing polishes?

This polish has been standard in the Menzerna range for a good few years now, with performance and cost per use than justify its popularity. With the alternative products of Menzerna 3500 and Menzerna 3800 available, one does wonder where the use for 3000 comes in.

With 3500 offering the same level of cut but with added gloss, I would choose 3500 every time. That is not to say 3000 is not a good polish, because it is. I feel however that the existence of 3500 and 3800 make this product almost obsolete. 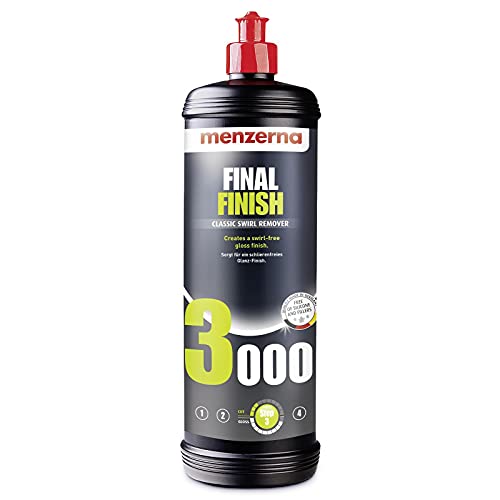 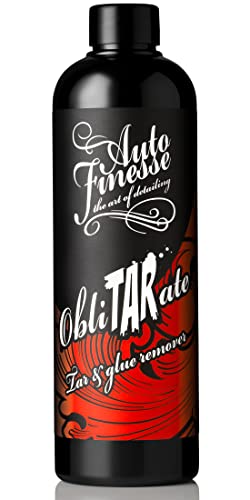 Tar remover should be an essential part of your auto detailing arsenal. Tar and asphalt are difficult to remove without using the proper cleaners. Using a damp cloth will not work even if you wipe and buff like a deranged lunatic. Tar spots or tar stains are actually soft when warm. Unfortunately, it also hardens… 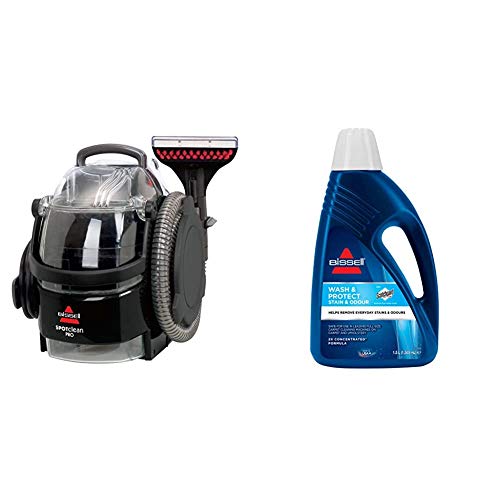 The Bissell Spotclean Pro is a surprisingly powerful machine for its size. It performed better than some of its larger rivals and for the price of the unit, it is very good value for money. Being so compact I would also recommend it for professional detailers/valeters as the unit works well with prolonged use. Prepmycar…

G4 Nanotech from Gtechniq is a water-based glass polish which uses nano-abrasives and citric acid to deep-clean glass surfaces. G4 is unlike other glass polishes and takes a bit of getting used to, but with practice, it is one of the most effective glass polishes available. It can be used as a stand-alone product, however,… 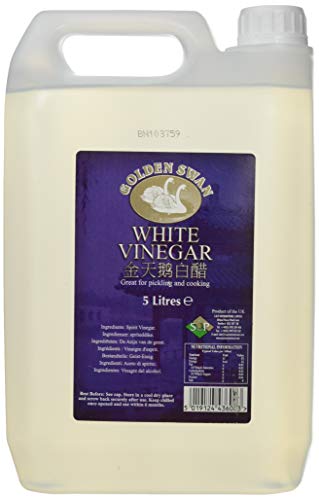 The yucky presence of mould, algae, or mildew in your car’s interior demands immediate attention. While some species of mould are relatively harmless, the really bad ones can mess up your health, particularly black mould or Stachybotrys chartarum. As if having the name ‘black mould’ is not terrifying enough, it is a toxic species of… 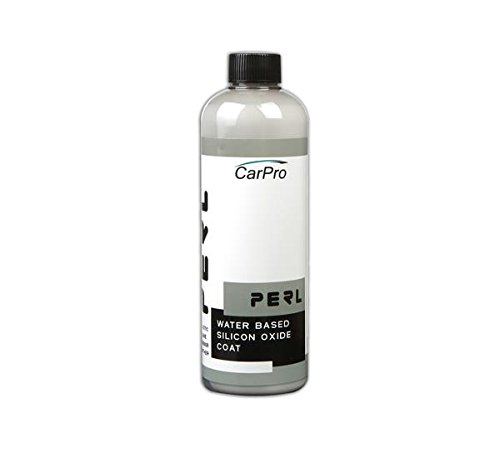 CarPro Perl Review/Overview CarPro comes highly recommended as one of the best tyre dressings on the market right now. Its finish is almost unrivalled and is one of few that not only offers that deep, matt-like finish but also gives you the longevity to go with it as well.  It’s a product that ticks so… 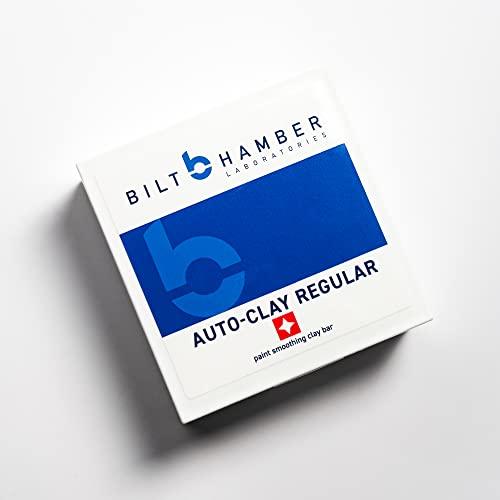 Claying a car can be one of the most important steps when fully decontaminating your paint. Throughout this article I will be looking at how to use a clay bar with the “Hashtag Technique and most importantly, safe practices with said clay bar. If you’re meticulous about cleaning and detailing cars, I’m sure you’ve probably…