Menzerna 1000 Heavy Cut Compound comes within a long line of Menzerna polishes that are some of the best that I’ve tested. You could argue that the range is a little over-populated, but as these are accessible for both weekend warriors and pro-grade detailers, they allow you to fine-tune any paint that you’re working on.

Unlike other heavy cut compounds from Menzerna, 1000 is not designed to necessarily skip steps. This polish has a high cut rating of 9/10, but the lowest gloss value of any Menzerna polish, at just 3/10, as reported by Menzerna.

Straight away it’s clear that this is a product that will need to be used as part of a polishing system, as opposed to a stand-alone product. It is capable of removing as low as 1500 grit sanding marks with a lambswool pad.

As with all of the automotive range from Menzerna, this product is filler and silicone-free. 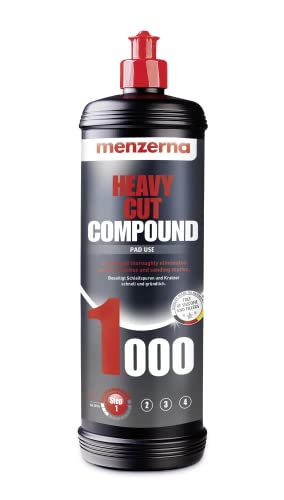 I am using a Vertool Forced Drive machine polisher for this test, combined with a cutting pad from Menzerna. First ensuring the surface was washed, I removed any tar and iron deposits using dedicated chemicals and clayed the paint to remove all embedded contaminants.

I spread a small amount of polish over the pad to prime it. This reduces friction between the pad and the surface, thus reducing heat and lessens the presence of holograms and pigtails in the paint. Then apply 5 or 6 small dots to the pad and spread the polish over the area with a low-speed setting.


Once the machine was near full power I spread the product and work in crosshatching motions. I made 5 passes over the area before raising the machine to max speed and removing all pressure to do one final pass.

For this test, I took a wire yard brush and dragged it across the bonnet, so the paint was inflicted with deeper than average swirl marks and scratches. While using the polish I was able to see the lines of the brush beginning to fade and after wiping clean the residue was very impressed at how well the panel had come up. Almost all of the marks had been removed after just one polishing set.

It was obvious that the ability of this polish to produce gloss is low. The surface was very hazy, more so than what I had seen after using the Menzerna 300 and Menzerna 400 compounds, respectively. Further refinement is required.

Menzerna 1000 Heavy Cut Compound should be the first step in a multistage correction process. It would be useful for correcting visible scratches on the paint, such as may be left by a scuff, or by a yard brush, if you ever find yourself in that situation.

With a cut factor of 9/10, it would be overkill to use this product to remove standard swirls and washing related marks. Instead, it would be better to start with a medium polish. If that is insufficient, then Menzerna 1000 is a viable option.

I would avoid this polish altogether if I were working on a car known to have thin or soft paint, as is common with many Japanese cars.

Very little to note here as the polish diminished as expected without forming irritating dust. The residue left after polishing was easily removed with a plush microfibre towel. If the surface is dry or oxidised, a spritz of water can help reduce excess dusting.

As I mentioned, this is not a stand-alone product, even on lighter paint colours. The Menzerna website recommends following a three-step process, starting with Menzerna 1000, moving to Menzerna 2500 and finishing with Menzerna 3000.


While this will no doubt produce excellent results, for the sake of the review, I followed up 1000 with 3000 using a soft finishing pad. The difference is quite remarkable.

When viewed like this, the ‘hazing’ left becomes very obvious. I was very pleased with the results of moving straight to Menzerna 3000, so that is something to bear in mind.

Like most others in the automotive range from Menzerna, this can be purchased in 250 ml and 1000ml pots, with the average price around £15 for the smaller bottle and £30 for the large bottle. Detailing can be an expensive hobby, so it is helpful to have an idea of the cost per use of a product, rather than just the cost of the product itself.

I weighed out how much polish I estimated I would need for a section roughly 40cm by 40cm. As shown, this was about 8g.

There would be approximately 25 sections of this size on a standard hatchback, so assume 200g of polish is needed. The density of this product is 1.5 kg/L, so that 200g equates to roughly 133ml. I’ll round to 135ml.

Using a paint depth gauge, I measured the average thickness of the paint before and after using Menzerna 1000 Heavy Cut Compound. This showed that there was on average 4 μm of clear coat removed (1 μm is 1/1000th of a millimetre).

This is consistent with testing the other cut compounds withing the Menzerna range. It is almost identical in cut to Menzerna 400, but less aggressive than Menzerna 300. All the readings were made on the same bonnet, so my results have been consistent with the manufacturer’s guides.

I used Menzerna 1000 to correct a very badly scratched panel. I was satisfied that all of the brush inflicted marks were removed in one set, although the clarity of the finish means more polishing will be required.

Not really, the products are different in what they aim to deliver. 1000 has a slightly higher cut than 400, but 400 produces a much better gloss. If I could only choose one, I would choose 400.

What speed should Menzerna 1000 be used?

If using a rotary machine, Menzerna recommends using speeds between 800 and 1200 rpm. If using a Dual Action machine, start on the lowest speed setting to spread the polish. Increase the speed to 80% of the machine’s capability, before finishing with one pass at maximum speed.

No, not necessarily, 300 cuts very aggressively which is not needed in most situations. If I had to choose one, I would choose Menzerna 400 as it still cuts well, but is less aggressive, meaning less chance of any disasters.

Do I need to use another polish after Menzerna 1000?

Yes, you will need to refine the marks left by 1000. I have found using Menzerna 3000 is a good way to achieve this.

Another strong performer in the Menzerna line up, but not one that would be a regular choice for me. While the levels of cut are certainly impressive, the poor finishing lets this polish down. The level of cut is not great enough to replace HCC400 in my toolkit.

Menzerna 1000 can be bought in bundle deals with a medium polish and a finishing polish. This would be a good starting point for someone starting paint correction, although caution should be used to mitigate the risk of burning through clear coat.

James is a professional detailer and owns East Antrim Detailing, based in Northern Ireland. He joined the Prep My Car team in 2020 and specialises in paint correction, detailing guides and troubleshooting on the site. He's been touted as one of the best up and coming detailers in NI and started his business aged just 20.

If I had to choose one thing that has revolutionised detailing in the last ten/fifteen years, I think I would have to say the introduction of microfibre towels has changed the industry significantly. We now have a much better understanding of the damage that can be caused using sponges, chamois and brushes on our paint….

Optimum No Rinse is a detailing product like no other I have used. It has a variety of functions, such as cleaning the exterior of a car using only one bucket, a wash mitt, and a drying towel. It can be used as a quick detailer and as a clay lubricant. The product is sold…

Gtechniq I1 Smart Fabric AB is effectively a fabric sealant with anti-bacterial properties that is effective in killing 99% of bacteria. It can be used on all kinds of fabric materials and protects against water-based stains, creating a hydrophobic effect. Gtechniq’s claims aren’t wrong in my opinion. It was extremely easy to use – just… 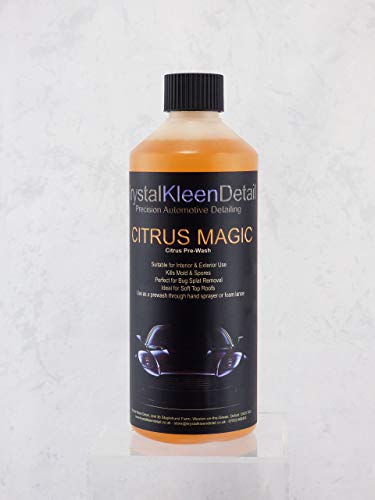 There is no getting around the fact that pressure washers are one of the most important tools in detailing. Allowing for high-pressure rinsing of paintwork and hard to reach areas, as well as the application of thick snow foam, I would be completely lost without my trusty Karcher.  Not owning a pressure washer (and there…